Just like last year, my oldest son and I are part of a co-op preschool with a few other families.  There are four kids in our group this year, and we alternate houses every week and hold preschool on Monday and Wednesday mornings.  This week was my first time to host since my baby was born last month.  I think it went more smoothly than I expected, but I think the key was low expectations more than anything else.

Our topic this week is sewing.  We talked about what types of things are sewed using fabric and played a game where the kids had to match different types of fabric.  I tried doing this first by having them wear blindfolds, but this was a little trickier than I expected, and after everyone had a few turns, I let them make matches by feeling and seeing.  After each kid had a few different matches, we talked about how each felt (some were stretchy, others soft, etc). 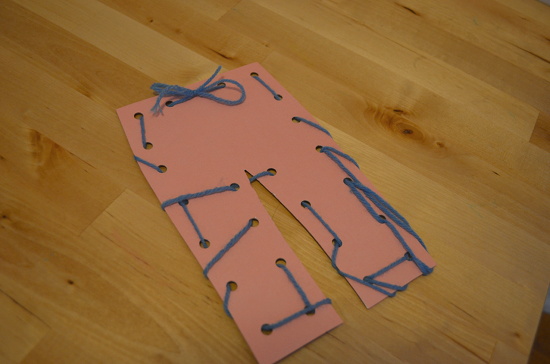 For our craft, I cut out a pair of pants for each child from a cereal box.  The kids coloured on the 'brown' side, and then chose some cardstock to glue onto the other side.  After this I punched holes along the edges, and gave them yarn to 'sew' with. 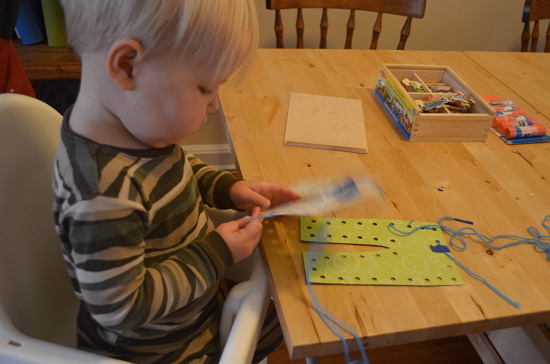 Some of the comments from the kids were pretty hilarious as they worked on sewing their pants.  One little boy said it was 'too hard' and he 'couldn't do it'.  Another boy said 'his back hurt', and the little girl said 'I can't sew anymore'. 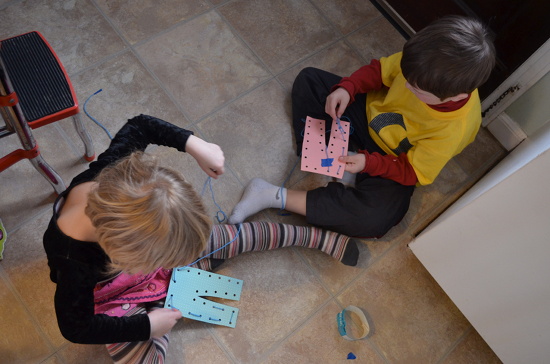 The last two comments were my favourite.  You would think they were workers in a sweat shop at the end of a long day, instead of working on a paper sewing card for twenty minutes total.

Tomorrow I think I'm going to attempt to get out my sewing machine.  My plan is to make up some monster shapes and have them decide where to put the facial features.  Then I'll sew them on and have the kids stuff them.  Too ambitious?  Maybe.

I'm curious, what have you done to teach your kids about sewing?  What age do you think is a good age to start?

That is really funny!

I think using cardboard to create pants (or any other shape for that matter) is a great idea. I have some cardboard and some yarn I could use. 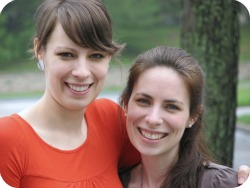 Welcome to our blog, inspired by our grandmother, Mary Frances. All our work is our own, so please give us full credit for anything you use from our blog. We love it when people link up, but please don't use images of our kids or copy and paste entire posts from our site. Thanks for stopping by!